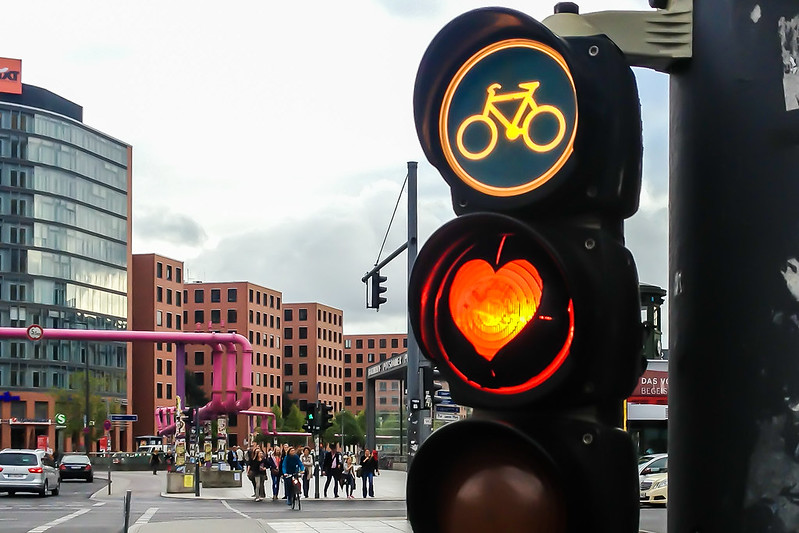 As founder of Berlin-based NGO IUM-Institute for Urban Mobility, Lehmann is behind a proposal to hand people a cash credit to use towards sustainable transport.

But there’s a catch – you’re not allowed to own a car.

“There are two sides to this concept. You need to [have] push measures, like making everything more expensive [when you use a car] or taking away space,” explained Lehmann.

“But we realised that this is very difficult to do in Berlin, or other German cities, as politicians here say this works against poor people, or personal freedoms, or whatever.

“So then on the other side we need the pull factor – improving the offer of public transport and bicycle paths, which I think is the main pillar.”

According to the proposal, anyone who does not own a private car and instead travels by foot, bike, public transport, or uses a car-sharing scheme, would receive an annual bonus of €1,100 – approximately the same amount as the cost of an annual subscription for public transport in Berlin.

Those receiving the cash would be free to spend it on whatever mode of transport they please – except a personal car.

“Usually, the bonuses [related to cars] that we discuss in Germany are that you have to get rid of an older car and buy an electric or more environmentally friendly vehicle – so you need to have a car to get the bonus in the first place.

“We simply want to reward people for not owning a car.”

Lehmann believes the bonus could be financed with income from Germany’s CO2 tax, or a reduction in “unecological subsidies” that many car owners currently enjoy, such as commuter allowances and the favourable taxation of company cars.

“We haven’t had a modal shift in Germany in 30 years – 75 percent of kilometres travelled in the country are by car, and 25 percent are by public transport, cycling and walking.

“This hasn’t changed at all even though we’ve been investing huge amounts of money into public transport for three decades now.”

So could investing in people instead be the answer?

In theory, the concept sounds like the perfect solution to cities’ congestion and environmental problems, but convincing residents to leave their cars behind has always been a tough sell – even in nations with well-developed public transit networks like Germany.

The country has one of the highest rates of car ownership in Europe and is home to some of the world’s biggest car brands, which carry considerable lobbying clout in the political sphere.

Lehmann is currently bringing his campaign to the newly elected national government, saying that despite the climate crisis and associated problems in cities, “transportation politics” will continue.

“Our approach will probably become even more relevant as people search for ways to change this sort of religious German car system.”

The practical technicalities of administering and enforcing such a scheme may also prove difficult, meaning cities may have to rely on a social contract with participants, rather than a legally enforceable one.

While some eco-conscious citizens could be trusted with using the money appropriately, Lehmann acknowledged it may be open to abuse and fraud.

But he pointed out that resources like car registration databases and heavy fines for those caught taking the money while still owning a car could ensure compliance with the rules.

“Basically the concept would be based on trust – you’d risk high fines, of say €20,000, if caught, so we figure most people would think it’s not worth the risk.”

The creation of a digital purse – which would only allow the funds to be spent on alternative forms of transport – is another solution being considered.

“We’re looking at how the funds could be ringfenced in a mobility app that has a banking function, where people could pay for transport,” said Lehmann.

This concept is something which already exists in some cities and regions – such as the UK’s West Midlands, which is currently trialling a scheme that provides credits to motorists who give up their vehicles.

Over 300 residents in Coventry, UK, have so far expressed an interest in giving up their cars in exchange for a credit worth up to £3,000 (US$3,980) which can be spent on public transport, taxis, bike-share schemes or a car club.

Transport for West Midlands (TfWM) – the region’s transit operator – has been running the pilot since March 2021, and to date has accepted 147 applicants and crushed 73 cars.

The agency has made £1 million available for the programme after receiving £22 million from the UK government to work on a number of pollution-tackling initiatives such as on-demand buses, cycle hire and driverless cars.

Credits are loaded to a pre-paid debit card, with the scheme open to residents of older, more polluting vehicles who live in parts of the city most affected by poor air quality.

TfWM says the debit cards are restricted by the merchant code – meaning they can only be used on transport services.

“Participants [also] sign a contract which includes a code of conduct, including a clause not to buy a new car,” said Chris Lane, Head of Transport Innovation, TfWM.

“However, this technically won’t stop someone buying a new car, but they cannot use mobility credits to do so.”

TfWM also monitors usage of the debit card and says it will follow up and engage with individuals to understand their transport choices and short to long-term behaviour change.

The trial scheme is set to run for two years, with the transit agency looking for 280 participants in total.

While not eliminating the car completely, the programme has been heralded by advocates as a step in the right direction.

“Mobility credits are a great way to encourage people to give up their cars,” said Alice Ridley, Head of Media and Communications, Campaign for Better Transport.

“Especially schemes like this one that are restricted so ensure that credits can only be spent on more sustainable modes of transport including public transport, car clubs and bike hire schemes.”

Other cities, including Barcelona and Vancouver have undertaken similar programmes, though their focus has been based solely on shifting drivers to public transport.

In Barcelona, residents who trade in older vehicles can receive a citywide free transit pass valid for three years, while in Vancouver, the city transit authority TransLink has partnered with non-profit SCRAP-IT to offer customers public transit passes worth CAD$802 (US$638) when they scrap their old fossil fuel cars.

The SCRAP-IT programme has been providing green transportation incentives for the past 25 years in a bid to encourage Canadian drivers to give up older cars for electric vehicle (EV) subsidies, carshare credits, transit passes, e-bikes and cash rebates.

“[People] know about the climate emergency and may be considering what they can do that will make a difference,” said SCRAP-IT CEO Diane Roberts.

“Our programme gives them the opportunity to make the switch to a cleaner form of transportation and make that transition much more affordable. It’s a win-win for the environment and their own pocketbook.”