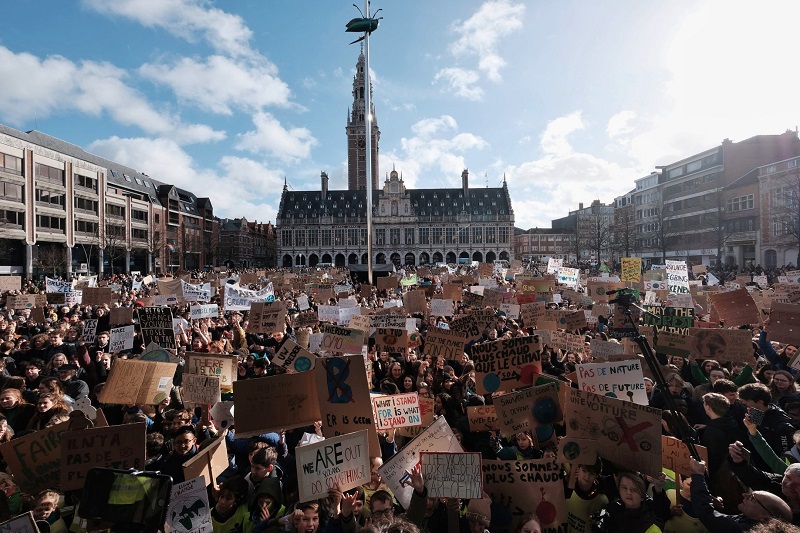 Most cities now recognise the importance of partnerships and collaboration to tackle pressing societal issues and the climate crisis. But handshakes, good will and scattered agreements can only get you so far.

The municipality of Leuven in Belgium is pioneering a new governance model of “radical participation,” aiming to accelerate and scale action through distributing decision-making and responsibility among residents, academia, civil society organisations and the private sector, ceding some of the city’s own power in the process.

In 2020, Leuven was named the European Capital of Innovation, winning €1 million (US$1.13 million) for its collaborative efforts, particularly around climate action, education and the economy.

Leuven’s Mayor Mohamed Ridouani says that previously: “There were a lot of things happening in terms of renewables, mobility and many other actions, but it was so fragmented, and it was not impactful enough.”

Leuven 2030, a non-profit organisation, brings together the city, universities, businesses, non-governmental organisations (NGOs) and residents around the Leuven Roadmap. The 13-pillar strategy, drawn up with experts to help Leuven become climate-neutral by 2050, focuses on buildings, transport, energy, nature, food, finance and more.

“It is not just a network. There are rules of play behind the organisation that we have created,” says Ridouani. “It’s a structural, systemic approach.”

Today, Leuven 2030 has around 600 members. Any individual or organisation can join and this makes them part of the General Assembly where they can collaborate, vote for plans, and be elected to the Board of Directors. General Assembly votes are split equally between the city, policy institutions, companies, citizens, non-governmental organisations and semi-public bodies such as public transport and energy operators. Some places on the 18-seat board are reserved for representatives of lower-income groups, vulnerable residents and young people.

As well as being essential to mobilise climate action, Ridouani believes this participatory approach is also important for social cohesion in cities.

“It is hard today to create communities and to connect people, especially in a world that seems very polarised and shattered,” he says. “But in our experience, when people can collaborate on something in common, that is binding and it gives a sense of belonging.”

“Climate policy can also cause inequality between the haves and the have-nots,” he adds. “With Leuven 2030 they can be part of the change and [we can] make sure that they are not marginalised by it.”

With power comes responsibility, both in terms of paying for projects and getting them done.

The city provides up to 50 percent of the budget and the rest comes from other partners, as well as European funding sources.

“To make sure that it is not just an instrument of the city, it is important that a big chunk of the budget comes from elsewhere,” says Ridouani.

Leuven 2030 has a team of 17 programme facilitators who are responsible for driving the roadmap programmes. Just under half are employed by the city government and the others are released part-time from their day jobs elsewhere.

Katrien Rycken, Director of Leuven 2030, comments: “I think this is a pretty powerful illustration of how this governance model engages and shares ownership. It creates the dynamic that we’re in this together, and this is a shared goal that everyone wants to contribute to.”

Ridouani and Rycken say that the governance model is proving effective in several areas.

During the pandemic, the Leuven Helps online platform has connected residents in need with thousands of volunteers and was one of the first municipal initiatives of its type to launch.

The governance model can also be particularly beneficial when difficult choices need to be made, such as around the use of public space.

The traffic circulation plan which came out of Leuven 2030 effectively pushed cars out from the city centre. Since then, the number of cyclists has increased by 40 percent and air quality also improved.

It wasn’t easy. The plan created a lot of debate and a certain amount of “hassle,” but it went through, says Ridouani. It would have been “unthinkable” if it had come from the city administration alone.

Citizens on bikes measured air quality with sensors, and others were interviewed about the impact of the new mobility plan.

“It’s citizen science at the same time and also enables you to frame the introduction of the circulation plan not only from a mobility point of view, but also from a quality of life point of view,” says Rycken.

A ‘strategic experiment’ in the borough of Kessel-Lo is working to co-develop a strategy with residents to drive modal shift and simultaneously improve public space and incorporate climate adaptations.

“It is more radical if we combine different components and different challenges that we face in the climate transition,” says Rycken. “We’re researching how we can accelerate these kinds of sensitive measures and transformations by further empowering and engaging citizens and stakeholders.”

Through Leuven 2030’s ELENA project, the European Investment Bank provided a subsidy of €1.5 million (US$1.2 million) for building retrofits. A network of 24 partners upgraded almost 100 buildings.

Because larger organisations including the city, university and private companies were willing to put their investment portfolio on the table, the funding also benefited smaller organisations such as schools, youth groups and social housing organisations.

“It’s a beautiful example of the DNA we try to foster in Leuven where the strong shoulders help those in more weak positions to move forward too,” says Rycken.

From here, the focus will include additional work to monitor “soft impact” outcomes such as trust, engagement and influence, alongside hard figures like the number of solar panels, trees and bicycles.

A new transition monitor developed with the University of Leuven aims to track Scope 3 emissions alongside Scope 1 and 2. It’s early days and the parameters are being defined but initial examples include input from local supermarkets on reducing sales of meat towards vegetarian food.

Further work will also be done to better understand the funding required for each climate programme and create an investment portfolio.

In 2022, more collaborative projects will be rolled out focusing on the district, neighbourhood and even block level.

Rycken’s advice to other cities interested in replicating the approach is: “It’s fundamental to start from a shared vision, a shared responsibility and a shared ownership. Also, keep science close from day one if you don’t want this to become hollow.”

She says that this foundation and open dialogue is key to moving beyond a project-based approach towards a systemic one that also tackles barriers related to governance, regulation and mindset.

“That is how we are not only working within the current playing field but pushing on the borders of it,” she comments.

The post Leuven harnesses the power of “radical participation” appeared first on capitaltribunenews.com.