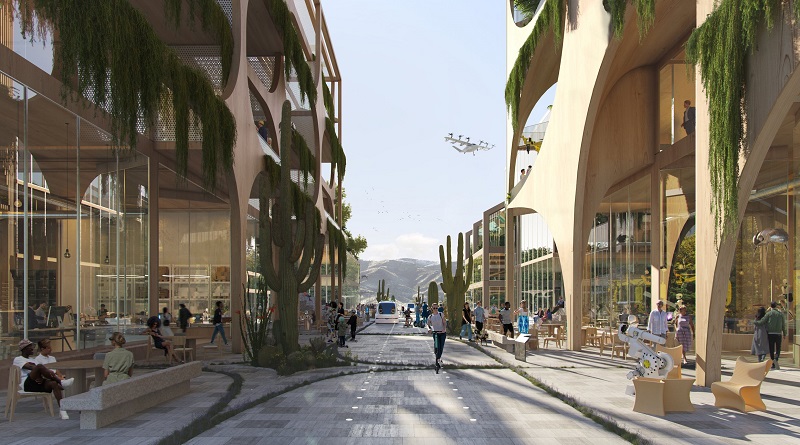 Entrepreneur and investor Marc Lore has revealed plans to develop a new city in the US which will be named Telosa.

A location has not yet been secured but possibilities include Nevada, Utah, Idaho, Arizona, Texas, and the Appalachian Region.

While the proposal may be bold, some question whether it is realistic or necessary.

Lore, who founded Jet.com before selling it to Walmart and joining the retailer as head of US e-commerce from 2016 until recently, claims that building a new city avoids the legacy issues of infrastructure and policies that constrain what can be developed. Lore was also the co-founder and CEO of Quidsi, the parent company of e-commerce websites Diapers.com, Soap.com and Wag.com. He called Telosa his largest venture to date.

In a promotional video, he said: “Cities that have been built to date from scratch are more like real estate projects. They don’t start with people at the centre, because if you started with people at the centre you immediately think: what’s the mission and what are the values? The mission of Telosa is to create a more equitable and sustainable future. That’s our North Star.”

Our vision is to create a new city in America that sets a global standard for urban living, expands human potential, and becomes a blueprint for future generations.#CityofTelosa #NewCity #CityoftheFuture pic.twitter.com/T9OO5ub6OT

He said the project will bring together existing best practices from cities around the world.

Residents could move in by 2030, according to the new website launched for the development.

Overall, the project is estimated to cost over US$400 billion, with $US25 billion needed for the first phase which would cover 1,500 acres for 50,000 residents. The ambition is for five million people to eventually live in Telosa and for the site to span 150,000 acres. Funding is expected to come from various sources including private investors, philanthropists, federal and state grants, and subsidies for economic development.

The website invites people to imagine a city where they always feel safe and welcomed, getting around is easy, nature is everywhere, citizens are well-informed and politicians are accountable. Images feature autonomous shuttles, electric vertical take-off and landing (eVTOL) vehicles and spaceship-esque monorail pods.

However, those behind it deny utopianism. “Utopian projects are focused on creating a perfect, idealistic state — we are not. We are firmly grounded in reality and what is possible,” the site says. “We are focused on the best, most sustainable solutions for infrastructure, urban design, economic vibrancy and city services, but we fully recognise that no solution is perfect and all human systems have flaws. Therefore, we are committed to new ideas, finding the best way to solve difficult problems and constant improvement.”

Lore also puts forward the idea of ‘equitism’ as a new model for society. The land selected for the Telosa development would be donated to a community endowment which would use increasing land values to fund “enhanced city services” around education, housing, healthcare and training.

The city would be led by a council and city manager.

Telosa joins a series of private-led projects to build full or mini cities from scratch. Others include Toyota’s Woven City in Japan, Tencent’s employee campus in Shenzhen, Bill Gates’ Belmont in Arizona, and Blockchains LLC’s plans in Nevada.

Last year Sidewalk Labs abandoned plans for a smart city development on Toronto’s waterfront, although a spokesperson for the company notes that unlike many ‘new city’ projects, Quayside was a redevelopment site, close to a major downtown core and owned by a public-sector partner.

At the New Cities Lab at McGill University, Dr Sarah Moser and her team have counted around 150 new city projects in more than 40 countries, from Forest City in Malaysia and NEOM in Saudi Arabia to major developments in Jordan and Egypt.

Most promise green, pedestrian-friendly smart cities but many hit political or financial roadblocks, or fail to live up to expectations. Futuristic master-planned cities such as Masdar in Abu Dhabi and Songdo in South Korea have been called ‘ghost towns’.

Commenting on the Telosa announcement, Grant Samms, a research analyst specialising in smart cities at Guidehouse Insights, told capitaltribunenews.com: “Projects like this can spur the public’s imagination about how a city – any city – can be moulded and remoulded to better serve its residents. While big dreams are certainly notable and intriguing, the track record of these types of proposed developments to achieve their vision is unfortunately poor.

“Developing the complex layer cake of city services including water, sewer, waste, transportation, emergency response, and government services is often a task underestimated both in complexity and cost. While big announcements can grab headlines, it’s often in the mundane where greenfield cities falter. There is always the possibility that someone may find a successful formula to develop this type of project, but it is so far a formula that has been elusive.”

Dr Moser, who is Associate Professor in the Department of Geography at McGill University, is also sceptical.

“I could be wrong, but I don’t think that the public, particularly during/after a pandemic that has enriched so many tech tycoons but impoverished so many others, has the appetite for the wealthy guys to conduct these high-risk experiments,” she said.

“This is not Silicon Valley and the risk is not just shouldered by investors. The risk is that huge tracts of land are cleared, water is diverted from water-scarce regions, and the environmental damage is done when there are many opportunities for the project to fail.”

Moser added that Lore is likely underestimating the leap from e-commerce to creating a city and that many will perceive Telosa as a “vanity project”.

“I’d be curious to know why he cannot find an existing town that shares his vision and is willing to adopt and expand according to his principles,” she said.

The post Entrepreneur plans to build ‘moonshot’ US city from scratch  appeared first on capitaltribunenews.com.