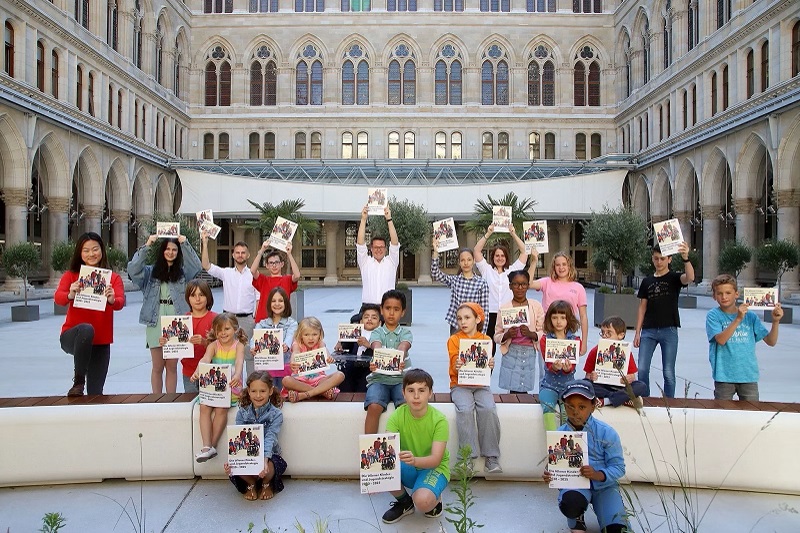 In 1993, Vienna hosted the World Conference on Human Rights, the first such gathering since the end of the Cold War. When the Austrian capital reflected on the 20-year anniversary of that historic conference, it led the city council to adopt a declaration in December 2014: “Vienna – City of Human Rights.”

For the last several years, the city government has been wrestling with how to turn that declaration into action. One issue came to the forefront: the role of children and youth. Once an ageing and shrinking city, Vienna experienced the fastest population growth of any major European city from 2009-2019, growing at a rate of 12.9 percent.

This breakneck growth rate has created two dynamics. First, by 2018, one in every five Viennese residents was below the age of 19 in a country where the voting age is 16. Second, by 2019, nearly a third of the voting age population were not Austrian citizens. Consequently, a significant number of Viennese do not have a formal role in the political system.

When the 30th anniversary of the United Nations Convention on the Rights of the Child arrived in 2019, the Vienna City Council resolved to incorporate the city’s children and youth into municipal government even if most of them cannot vote. The result: a series of workshops citywide that asked four simple questions of young Viennese to solicit direct feedback on how to improve the city.

Called Werkstadt Junges Wien, or ‘Repair Shop Young Vienna’, the programme hosted 1,309 workshops reaching 22,581 children and young people over the course of a year in 2019. The city council then incorporated the results into an official Children and Youth Strategy adopted in June 2020.

Project manager Bettina Schwarzmayr described the series of workshops as an “annual service check” for the city. The four questions were: 1) What does Vienna deserve a medal for? 2) What needs to be repaired in Vienna and how would you repair it? 3) How do we take care of the city to make it last? 4) What do you need to feel safe and well?

Scharzmayr and her team made a concerted effort to reach out to the broadest possible range of children and youth. While teenagers may have more awareness of issues, half of workshops were conducted with children between the ages of 6 and 10. The team also ensured that respondents were not just the German-speaking native-born Austrian citizens with top marks in school, but also youth who were immigrants, asylum seekers, disabled, homeless, or orphans. The project team tapped into the city’s broad network of civil society institutions, from schools and youth clubs to immigrant rights groups and homeless shelters. The city created a basic training for each of these institutions to conduct the workshop on their own time, at their own pace, and in their own language – the workshop toolbox was ultimately made available in 174 languages. Project organisers guaranteed privacy to the respondents and hired social scientists to code and analyse the data.

“The fact of inviting all children and young people of Vienna shows the will of having an inclusive approach, going beyond the ‘usual suspects’ of engaged youth, which, especially at that age, belong to upper class families more prone to take part in community initiatives,” said Ivan Neirotti of the European Youth Forum.

Pre-existing relationships expedited the process, which started with an advisory board to design the workshop toolbox. “In Vienna we already had a big network of organisations working with children and youth and they all are pretty committed to designing the city for this target group,” said City Councilmember Marina Hanke. “All were very open and joined very fast.”

One organisation that joined the effort was the Rote Falken (Red Falcons), a youth scouting movement. 15-year-olds Florian Gruber and Yannic Lamprecht are members of the Red Falcons. In December 2019 they met with ten of their fellow scouts in a meeting room to discuss the four questions. Environmental protection, education, healthcare, and city planning that prioritises walkable routes to playgrounds topped the group’s agenda. Shortly thereafter, they joined workshop groups from across the city in a large municipal gala hall.

“I was thinking it would be a small project. I was surprised that it was getting this big,” said Gruber. “People took it very seriously,” said Lamprecht.

In the larger setting, the Rote Falken boys met youth from different backgrounds across the city, but found much common ground. “We were all discussing big topics, like fewer cars, smoking bans in parks and playgrounds, and sexual education in school,” said Lamprecht. “Most of us had the same imagination of a cleaner, greener, and better city.”

For Vienna city hall, public outreach is not new. “There is already a culture of civic participation in Vienna,” said Hanke. “When a new park is created, we ask everyone from young people to the elderly: What do you need?”

But the scale, open-ended nature, and follow-through of Werkstadt Junges Wien were unique.  “Politicians were unusually brave to allow the agenda-setting 100 percent by the target group,” said Schwarzmayr. Most importantly, elected officials also had to ensure that the workshops led to action.

“There was a firm political commitment that we don’t just ask them once and say thank you for your ideas,” Hanke said.

While less than a year old, the children and youth strategy has already yielded results. Mayor Michael Ludwig hosted a press conference just for children and youth about the city’s pandemic response. The city is building nine new shelters for women victims of domestic violence, with one shelter dedicated to girls and young women. Vienna will also allocate €1 million (US$1.17 million) for participatory budgeting geared to 4-19 year olds.

In the wake of Werkstadt Junges Wien’s success, smaller cities in Germany and Austria have inquired about how they can adapt the process to their own community. “Four such simple questions are easily replicable,” Schwarzmayr said.

And while Vienna consistently ranks #1 on global quality of life indices, the city’s own youth acknowledge both the city’s relatively privileged position and the room for improvement. “It is important to say that Vienna is a wonderful city and in Vienna many things are very very great, but there are things which can be improved,” said Yamprecht. “This is true in every big city. It’s important to be interested in politics and to make the world a better place.”

Vienna is one of 15 finalists in the Guangzhou Awards. The winners will be announced later this year. The biennial Guangzhou Award was launched in 2012 and is run in partnership with the City of Guangzhou, China; United Cities and Local Governments (UCLG); and the World Association of the Major Metropolises (Metropolis). It recognises innovation in social, economic and environmental issues and aims to share best practices between cities globally.

The post How Vienna involves children in shaping the city appeared first on capitaltribunenews.com.