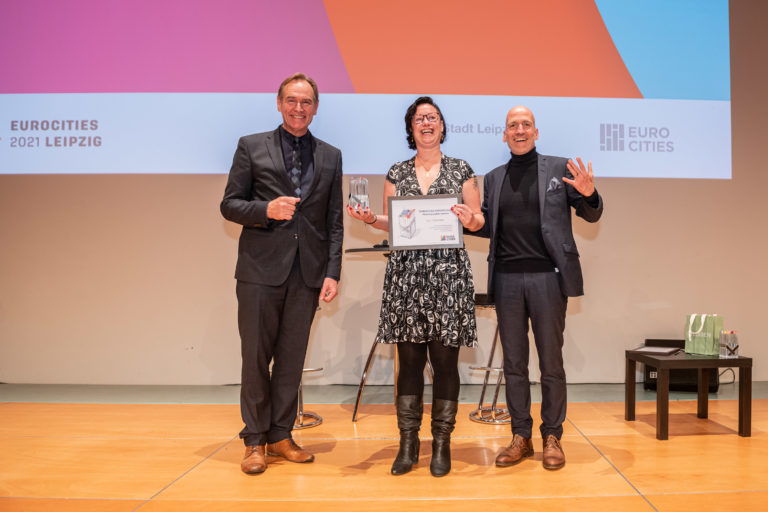 The environment was top of the agenda at this year’s Eurocities conference. Awards recognised sustainability projects but campaigners called on local leaders to act with greater urgency. Cities, meanwhile, had some demands of their own. Christopher Carey was at the event.

The Danish capital also won the ‘members vote’ in a special extra category that was created for this year’s awards, which took place on the sidelines of Eurocities 2021.

Ghent won the ‘from farm to fork’ category for its ‘Ghent en Garde’ urban food system initiative – a push to shorten the food chain and reduce food waste.

“Since the launch of this strategy, Ghent has been recognised as a European trendsetter in urban food policy,” said Tine Heyse, Ghent Alderman for Environment and Climate.

“Ghentians, Ghent entrepreneurs and organisations that use plant-based and local food deserve congratulations for their efforts.

“Thanks to the participative approach to Ghent en Garde, we can support both small-scale initiatives and
realise large-scale changes in our food system.”

Nine cities were shortlisted for the awards across the three categories, with the winners selected by a panel of expert judges.

With the event taking place in parallel to COP26, city leaders were urged to take the lead on providing climate solutions.

During a panel debate, Janine O’Keeffe from environmental group Fridays for Future said: “2050 is the basis for the ‘blah blah blah,” referencing Greta Thunberg’s recent criticism of global leaders’ targets of 2050 for carbon neutrality.

“We need to ask ourselves, are we stepping up to the challenge?” O’Keeffe added.

“Many people say it’s too late or it’s gone too far, but the climate is like quicksand, you slowly get further and further in, and as things get worse we will find it harder to dig ourselves out.”

When asked what cities could do in the immediate future to mitigate these concerns, she said: “If I had an open book, every city should declare a climate emergency, explain why they are doing this and then bring citizens in to create laws via citizens’ assemblies.”

Gilliland added that the extent to which cities were consulted on key policy decisions was not sufficient, and that national governments are “backloading instead of frontloading” their climate targets.

Dario Nardella, President of Eurocities and Mayor of Florence, echoed the need for a more participatory approach with cities, saying “Nothing is possible without us. We need to push our national governments and the European institutions to have more courage and ambition to meet these goals.”

“Recovery is urgent. In cities, this is clearer than anywhere else since they have been deeply affected by the pandemic.

“Meanwhile, we must not forget our commitments to ensure a digital, green and fair transformation. As the projects show, cities are a font of a million good ideas that can be shared, reused, upscaled and adapted and you just have to take a look at them to get inspired.”

Delegates from over 85 cities attended the three-day conference.