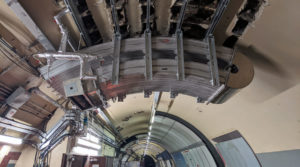 Transport for London (TfL) is testing a cooling panel at a disused station platform to assess its suitability for reducing temperatures across the Tube network.

The panel aims to provide cooler air to passengers waiting on platforms, as well as mitigating potential temperature increases associated with running an increased number of trains on the Piccadilly line.

The trials come as the UK experienced its hottest temperatures on record last week, with readings hitting over 40C.

“This new technology could play an important role in ensuring we are doing everything we can to protect TfL’s network against future temperature increases, helping to keep staff and customers safe and comfortable,” said Paul Judge, TfL’s Project Director for the Piccadilly Line Upgrade.

“By seeking innovative solutions to cool platforms on the deep Tube network, we will be able to support future Piccadilly line train frequency increases with the possibility that the technology could be used on other Underground lines.”

The panel works by circulating cold water around pipework within a curved metal structure to chill it.

It then circulates air, using an industrial-sized fan, through gaps in the panel’s structure, which in turn is cooled.

According to TfL, the panel could also have the additional benefit of halving operational and maintenance costs, compared to existing technology used to manage temperatures on Tube lines.

The trial is part of the UK Government’s TIES Living Lab programme, a collaboration of 25 partners focusing on ten infrastructure, data research and digital demonstrator projects.

Reducing Tube temperatures has been a complex task for TfL, with financial costs cited as one of the main barriers.

The operator has said traditional cooling systems have proved “prohibitively expensive and difficult to install within the 120-year-old tunnels and stations”.