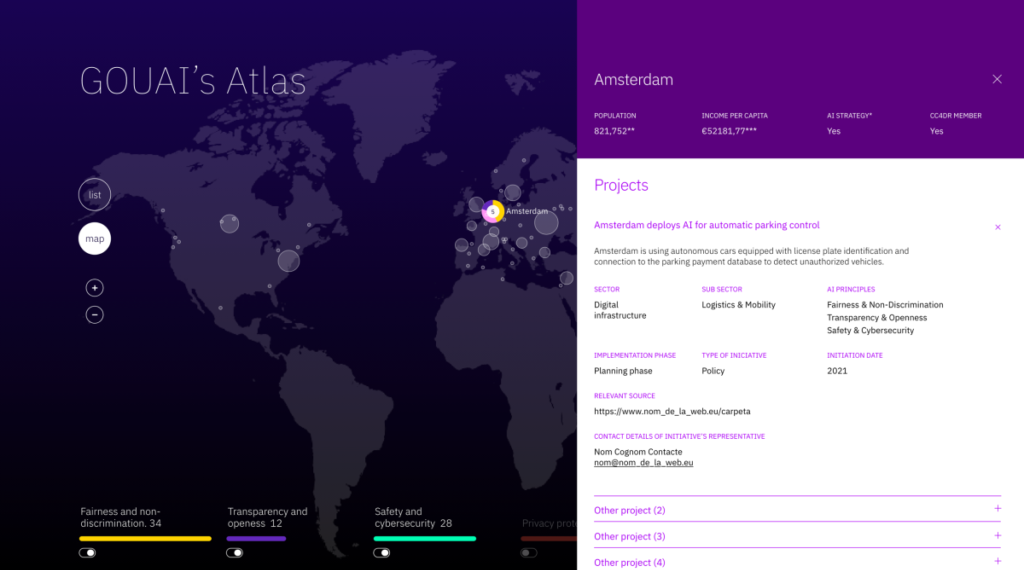 A new online ‘atlas’ details urban artificial intelligence (AI) projects across the globe, with a focus on alignment with ethical principles.

It was launched by the Global Observatory for Urban AI, which is an initiative of the Cities Coalition for Digital Rights and led by CIDOB – the Barcelona Centre for International Affairs, and the cities of Barcelona, London and Amsterdam.

The programmes aim to help cities deploy AI effectively and ethically through frameworks and real-world examples of projects, policies and strategies.

The Atlas of Urban AI so far includes 106 initiatives in 36 cities, with municipalities invited to submit their own.

Cities using AI include Los Angeles to better understand air quality, London in Canada to predict the likelihood of individuals becoming chronically homeless, and a chatbot from Buenos Aires.

As well as providing information on individual projects, the mapping aims to track how cities’ use of AI evolves over time.

Initiatives added to the Atlas must include provisions to respect and uphold one or more of the ethical principles defined by the Global Observatory for Urban AI relating to fairness and non-discrimination; transparency and openness; safety and cybersecurity; privacy protection; sustainability; and accountability.

Image: Entry in the Atlas of Urban AI

Eighty percent of the initiatives mapped in the Atlas are projects, 15 percent are policies and five percent are strategies.

“This is something that happens also in other fields,” said Marta Galceran, Research Fellow with the Global Cities Programme at CIDOB, speaking at an event last week.

New York and Barcelona are examples of cities that have published AI strategies. Amsterdam and Helsinki pioneered AI Registers which are now being adopted by others, and cities such as Amsterdam and Barcelona are using procurement clauses to ensure that any intelligent systems included in municipal tenders respect people’s rights.

In terms of other preliminary conclusions from the Atlas, Galceran said most AI projects with an ethical lens are being deployed in Europe and central Asia, as well as some in North America.

The majority of the projects listed in the Atlas relate to governance and urban services, followed by social services, mobility, environment, and urban planning. Others focus on security and resilience, and the economy.

“This is the picture today. Let’s see how this evolves in the future,” said Galceran, adding that she expects mobility and environmental issues to be growing areas for AI.

Around a third of the Atlas-listed initiatives are in the implementation phase or fully implemented.

“This is not wishful thinking… there are projects that are working and most of them, they are working fairly well,” Galceran commented.

The post Atlas maps how cities around the world are using AI appeared first on capitaltribunenews.com.