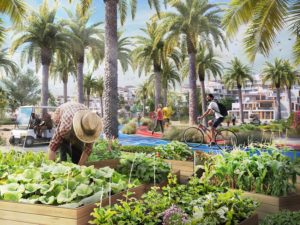 Saudi Arabia’s latest smart city endeavour – AlNama – will be a zero-carbon community where “people, planet and profit thrive in balance”, according to the company behind its development.

However, few details are available and experts question some of the sustainability promises.

The project – designed by Dubai-based developer URB – is planning to provide 11,000 residential units and aims to eventually host a population of 44,000 people.

Located on the outskirts of the capital Riyadh, the 10 square kilometre city will feature various hubs including residential, educational, commercial, tourism and medical facilities.

“AlNama aims to be the next generation of self-sufficient city, producing all the city’s renewable energy needs, as well as the resident’s caloric food intake on site,” URB’s CEO Baharash Bagherian said in a statement.

The project plans to create a green circular economy for the city, which will be powered by 100 percent renewable energy, water recycling and waste recycling.

Details on how the scheme’s aims will be achieved were not expanded upon in proposals, however, and URB did not respond to questions from capitaltribunenews.com.

“This project looks like it’s just a suburb [of Riyadh], and it seems like it’s trying to be more than just a suburb where people sleep and then commute out,” Dr Sarah Moser, Associate Professor at McGill University’s Department of Geography, told capitaltribunenews.com.

“There is a huge housing shortage in Saudi Arabia, and I assume that [the project will result in] a better neighbourhood than what we’ve seen elsewhere in the country.

“It’ll probably be denser, and more energy efficient – but it’s definitely not going to be carbon neutral.”

Moser, who specialises in Middle East geography, questioned how the city could be supplied with enough water given the country’s climate, and how this could be done in a carbon-neutral manner.

“There’s a lot of decorative water features [in the design proposals] that look beautiful and would cool the environment to some extent, but I think given the temperatures in Saudi Arabia, especially in summer, all of those are going to evaporate instantly.”

“So my question would be where is all this water going to come from? Currently water in Saudi Arabia either comes from aquifers – which are nearly depleted – or desalinisation plants which are so energy-intensive to run, and are powered by oil.”

URB has said solar power will be the driving force for the city’s 100 percent renewable energy aims – despite currently accounting for just 0.5 percent of Saudi Arabia’s total electricity production in 2020.

The project’s website claims: “AlNama will import yet export more renewable energy through a two-way grid system, thus creating a green economy for the city.”

“Another question I’d have is: ‘Is it connected to the Riyadh metro or not?’,” added Moser.

“I’m kind of optimistic in a way that at least we’re having a conversation like this in a country like Saudi Arabia – we’re finally talking about sustainability,” she said.

Promotional images the project have also raised questions, including an image of a man and woman holding hands, which is currently illegal in the country.

“I think in a lot of the promotional images I’ve seen over the years for Saudi Arabia, they show people breaking the law,” said Moser.

“So I think they’re aspirational, that things will change or they are sort of signalling that this will be different, or governed differently.”

Another feature of the project which has yet to be detailed is the extent to which data will be gathered on the city’s inhabitants.

URB says ICT and internet of things technologies will be integrated into the city’s hard and soft infrastructures to create an intelligent and collaborative ecosystem.

“Being a smart city, using AI and harvesting data on residents and visitors is clearly part of the project, but what’s not clear is what data, who’s doing it or how,” Moser added.

In 2017, Saudi Arabia’s Crown Prince Mohammed Bin Salman unveiled plans for a futuristic, high-tech city dubbed Neom. It is set to include a car-free, pedestrianised zone called The Line, which aims to have all residents’ needs catered for within a five-minute walk.

With a budget of US$500 billion, the prince has billed Neom a city that will transform the country’s economy and serve as a testbed for technologies that could revolutionise daily life.

The proposed site of the project, however, has daily summer temperatures over 40C and almost no fresh water, with energy-intensive desalination plants as the most likely source.

Several commentators have questioned the viability of the plan, which was originally launched at the Future Investment Initiative conference in Riyadh.