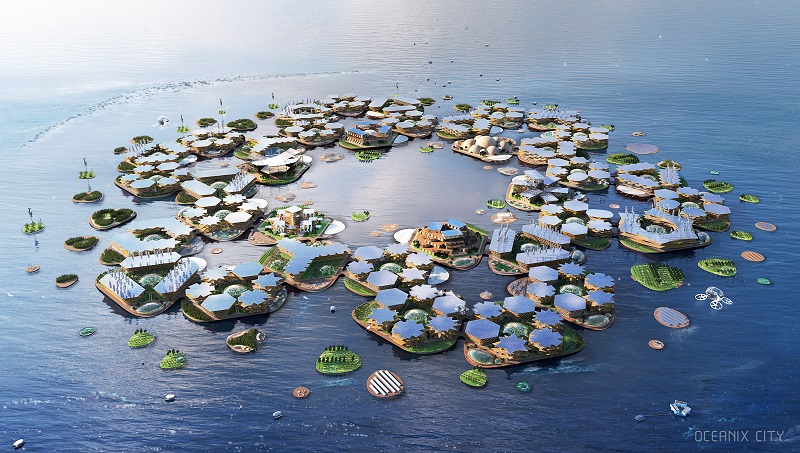 The City of Busan, UN-Habitat and ‘blue tech’ company Oceanix have signed an agreement to build the world’s first prototype sustainable floating city.

The initiative aims to demonstrate solutions for coastal cities threatened by sea level rise. According to UN-Habitat, two out of every five people in the world live within 100 kilometres of the coast, and 90 percent of mega cities worldwide are vulnerable to rising sea levels.

The floating city to be built off the coast of Busan is envisaged as a “flood-proof” infrastructure that rises with the sea and produces its own food, energy and fresh water with fully integrated zero-waste closed-loop systems.

“Sustainable floating cities are a part of the arsenal of climate adaptation strategies available to us,” said Maimunah Mohd Sharif, Executive Director of UN-Habitat. “Instead of fighting with water, let us learn to live in harmony with it. We look forward to developing climate adaptation and nature-based solutions through the floating city concept, and Busan is the ideal choice to deploy the prototype.”

The agreement follows a 2019 UN Roundtable co-convened by UN-Habitat, Oceanix, the MIT Center for Ocean Engineering and the Explorers Club, where the vision for the floating city was initially revealed.

The proposal outlined a floating community made up of modular interconnected islands, expected to accommodate up to 10,000 residents over 75 hectares. Plans also include communal farming, buildings that are wind-resistant, provide shade and generate solar energy, and measures for underwater ecosystem regeneration.

Busan, located on the south-eastern tip of the Korean peninsula, is home to 3.4 million residents and one of the world’s busiest shipping ports. Through supporting the project, Busan says it also aims to cultivate a new generation of blue tech innovators, entrepreneurs, and researchers.

Busan’s Mayor Park Heong-joon said: “With the complex changes facing coastal cities, we need a new vision where it is possible for people, nature and technology to co-exist. There is no better place than Busan to take the first step towards sustainable human settlements on the ocean, proudly built by Korea for the world.”

Oceanix was founded in 2018 to design and build self-sustaining floating cities.

“Sea level rise is a formidable threat, but sustainable floating infrastructure can help solve this looming catastrophe. We are excited to make history with Busan and UN-Habitat in ushering in humanity’s next frontier,” said Oceanix co-founders Itai Madamombe and Marc Collins Chen.

The post Flood-resistant floating city to be built in South Korea appeared first on capitaltribunenews.com.